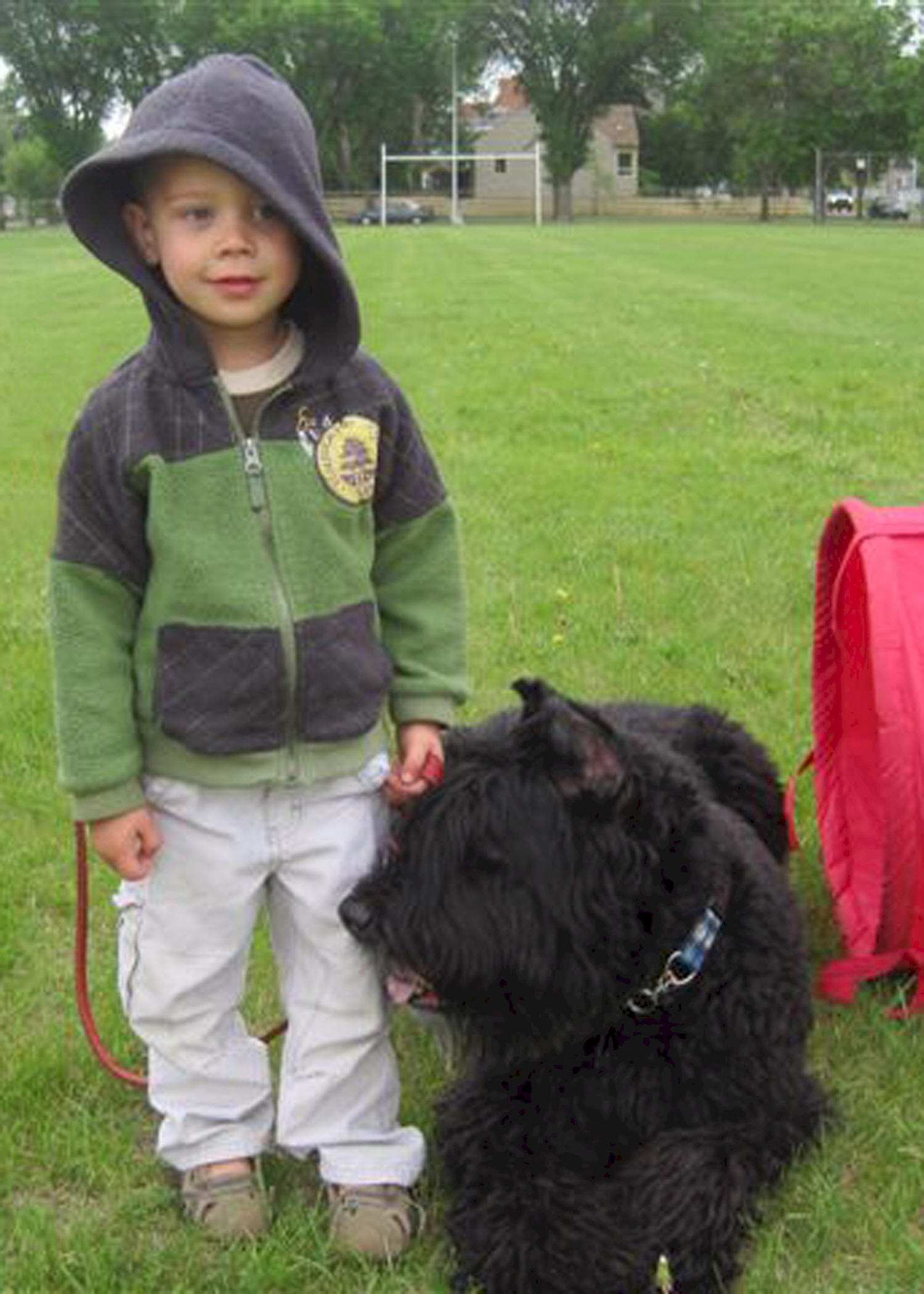 Jacques is from Recks & Nils first litter. He makes his home in Edmonton, Alberta, Canada, where he has been active in many types of training. Other activities include skiing, toboggan pulling, playing and hiking.

He also works as a therapy dog with Special Needs Children. Below is a recent report from his family detailing the story of how he arrived at this career. We are very proud of him, and are gratified that he found a great home that really appreciates and makes use of his talents!

I thought I would send you an update of Jacques, our family’s wonderful companion, in Edmonton, Alberta. Jacques continues to be a much loved dog who demonstrates a diversity of skills and ability. As you know from previous updates, Jacques started out with completing the highest levels of obedience training. He then entered search and rescue training, and he excelled in this area. He moved quickly from one level to the next, demonstrating exceptional drive and skill. Unfortunately, I had to leave search and rescue training because I did not have the time for this commitment. My father had taken ill, and I became care giver to aging parents. I did continue with the agility portion of search and rescue for more than a year. Jacques loved and again excelled at “police agility” classes. He also loved fun agility and showed an intense competitive quality. He became the favorite to run anchor for his team because he was very fast for a large dog, but more than that, he never made a mistake. He anchored his team to win many times. On the home front, Jacques travelled with us to many mountain areas for ski racing events and liked to go just about anywhere. Jacques is a very active dog and now that ski racing has ended as a family activity, he most likes to go running with my husband and adult children. We also have him pulling a toboggan with our little grand nephew on it, going on straight paths, but also up small hills. We have a special harness for him to do this type of pulling; and my husband runs along side him. Jacques loves this and seems to do it effortlessly.

Along the way, we discovered in Jacques other exceptional skills. When my dad and then my mother-in-law, were in long term care facilities, we would bring Jacques to visit. He proved to be an incredibly sensitive dog to “illness.” He would consistently approach the most ill person and he would place his head in their lap. (He was not ever fazed by wheelchairs, oxygen tanks or IV poles.) Jacques would gently nuzzle beneath their hands if they could not move. He was an instant hit and became a favorite dog in these facilities. He was amazingly calm and seemed to instinctively know what to do…I did not provide any special training in this area. He just performed all of this “therapy” behavior naturally. We just had to watch out for the resident cats as he was a little too interested in what they were doing.

This brings us to today: I work at an agency that serves preschool children, birth to age 5, who have special needs. We have various programs at this agency and Jacques has become a child “therapy” dog. We started this almost a year ago and like his other activities, Jacques excels in this area. Last school year he spent every Thursday morning in a class of 14 children, age 3 and 4, for 6 weeks. The teacher in this class is a dog person as well and we together created a curriculum that included “a dog bite prevention program” as well as their child development goals. The kids learned to ask me “to pet my dog”, to pet under the chin, feed a treat with a flat hand and not to run when dogs are around. As a number of the children in this program have hearing loss and use sign language, I have taught Jacques a number of signs – he knows sit, down, stay, stop, eat, hungry and outside; as well as quiet and directional signs. Jacques learns quickly and again, seems to naturally know how to behave around children and what various children need. (He amazed us one day when a child with autism, who has a tendency to scream, approached him quietly and by crawling on the floor – Jacques was in a down stay and “encouraged” this child, by making eye contact, to come and pet him. We did not expect the child to pay attention or interact with a dog. We thought the child would scream in fear. But instead Jacques achieved something people were not able to with this child – appropriate interaction and eye contact.)

Jacques tends to gravitate to the children who have the most complex needs. The pictures I have attached are of two of the children Jacques worked with last year. (I have permission from their parents to share these photos with you.) In the picture we are outside during the gross motor or gym part of their class. The children learned words to tell Jacques what to do, ex. “Jacques, go through the tunnel. Jacques, jump over the tunnel.” They would hold the leash and walk Jacques around the tunnel. I was walking right beside them, but Jacques performed this with the children in command. One of the kid’s favorite activities is to play “search” with him. Jacques is out of the room and the kids tell me where to hide his toy. He comes back in the room and they command him to “find it”. They tell him to search “up” if the toy was hidden on a shelf. They love it when he finds his toy, which is all the time, as these are the games we used in search and rescue training. (Jacques’s search training used “scent search techniques.”) The children’s program is highly successful and we will be starting it again at the agency this spring. We have been able to accomplish individual developmental goals more quickly by using a dog as motivation. One child who did not speak because of trauma, asked me, “Can I pet your dog?”. The speech pathologist who had been working with the child for 6 months, said, “All that individual work, and what I actually needed was a dog.”

Just to clarify, I have investigated therapy dog organizations, but because the children that Jacques is involved with are so unique and diverse in their special needs, I have not joined. Jacques already has a high degree of obedience and other training; and most importantly has proven that he instinctively/ intuitively knows what to do. I have learned to trust his reactions to people, children, other dogs and various other situations. He is truly an amazing and special dog.

(One more story: We were looking after a fearful female rescue border collie…I was trying to get her to stand up from a cowering down position. As I was working on this, Jacques came over and tried to lift her up under her torso with his head. She responded to this and stood up. It seems that Jacques has a calling in therapy!)